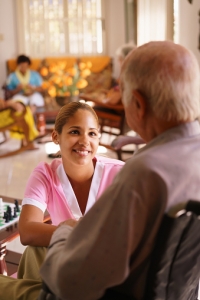 Hospice care happens at the end of life, when a patient is coming to the end of a terminal disease, or simply passing away at the end of their lives. Hospice services can be arranged either in the patient’s home or in a facility where staff is typically on call 24 hours a day, 7 days a week. According to the National Hospice and Palliative Care Organization, the goal or intent of hospice services is “caring not curing.” Hospice focuses on pain management and symptom control for patients who are facing imminent death.

Since 1983, hospice services have been covered by Medicare. Facilities that provide hospice care receive reimbursement from the Center for Medicaid and Medicare Services (CMS), but since the passage of the Affordable Care Act (ACA), and revisions to the end-of-life policies that went into effect in January 2016, an aggregate cap of $27,382.63 per patient has been put in place. Once a patient has remained in hospice care longer than 180 days, the facility is no longer being fully reimbursed for their care. Therefore, the shorter period of time a patient remains in hospice care, the more advantageous for the facility. Unfortunately, these reimbursement caps on hospice care may be leading to a decrease in the quality of care that hospice patients receive while they are yet living.

Inexcusable behaviors around the country

A recent example of this occurred in Texas when the CEO and founder of a hospice service told his staff nurses to fatally overdose hospice patients who were living too long. According to a story on The Dallas Morning News, Brad Harris, CEO of Novus Health Care Services in Frisco, Texas, sent text messages to nurses telling them, “You need to make this patient go bye-bye.” At least one nurse refused to follow his orders. Harris is under investigation by the FBI. No charges have been filed yet.

A story in the Washington Post describes how hospice patients who are receiving treatment at home are not receiving the care they need especially during crisis situations. The story describes how some patients were tormented by pain, breathing difficulties, malfunctioning oxygen tanks.

Pro Publica ran a story, “Gone Without a Case: Suspicious Elder Deaths Rarely Investigated,” which detailed cases in which patients might have been abused or neglected at the end of their lives, If it were not for the complaints of concerned relatives and whistleblowers, these elders would have simply been buried while those abusing and neglecting patients for profit are free to continue their work and possibly harm more patients.

It must be said that while hospices are among the least inspected organizations in the U.S. health-care system according to the Washington Post, most hospices provide quality care. Many nurses who do palliative care actually consider it a calling. However, since the industry transitioned from mostly religious-based nonprofit facilities to for-profit models when Congress allowed Medicare to pay for hospice services, the industry serves more than a million patients and bills $17 billion annually with the largest portion of the revenues coming from the Department of Health and Human Services, CMS.

Regardless of whether a person is on their deathbed or not, every human being deserves the right to live with dignity and be treated with care until and after the moment they pass away. Even in palliative care, there is an accepted standard of care that doctors and other medical professionals are required to adhere to. When their actions deviate from that standard of care and cause harm to the patient, there is a legal remedy. A medical malpractice attorney can explain all of the details of what compensation is available given the facts of your case.