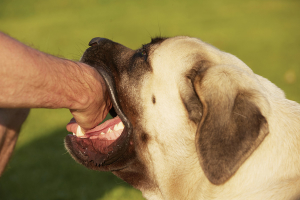 Two years ago, a West Virginia woman named Elizabeth Crawford went to visit a House of Representatives member at the Cannon House Office Building. While she was waiting, she dropped her pen on the floor. She bent over to pick up the pen when a staffer’s dog bit her right index finger, according to the Washington Post. The article goes on to say that Ms. Crawford experienced “severe and permanent bodily injuries and mental anguish; she has incurred medical expenses attempting to cure herself of such injuries; and her normal, social and recreational activities have been curtailed.”

Ms. Crawford and her lawyers are suing the House of Representatives for negligence to the tune of $200,000. The staffer’s dog was not up to date on his rabies shot at the time Ms. Crawford was bitten. The Post reports that Ms. Crawford had $26,000 in medical expenses, and that the remaining $174,000 is sought for pain and suffering.

Does she have a case?

She certainly does – and for a number of reasons:

Rabies is a vicious, potentially life-threatening disease. The Mayo Clinic reports that “once a person begins showing signs and symptoms of rabies, the disease is nearly always fatal.” Furthermore, there is no cure for rabies. A doctor can only begin a series of shots over the course of two weeks to attempt to prevent the virus from taking hold. That means that Ms. Crawford spent two weeks wondering whether or not the dog had rabies and whether or not she would be infected with the virus, and then an untold amount of time wondering if the symptoms would eventually manifest. If she had started to show signs of rabies – which include fever, nausea and vomiting, like the flu, as well as insomnia and anxiety, which might be brought on simply by thinking you might be infected with rabies – then the chances of her survival would be very slim indeed.

We are happy to report that neither the staffer’s dog nor Ms. Crawford were infected with the rabies virus – but the emotional trauma of not knowing must have been excruciating. We hope this is a firm lesson to both pet owners and office workers that it is never acceptable to leave your pet unleashed in a public environment.

For more information about dog bite injuries, or to learn about how a personal injury lawsuit works, we invite you to visit Paulson & Nace, PLLC.