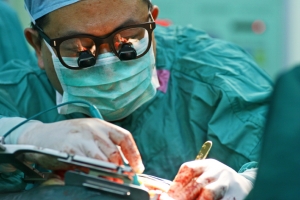 St. Mary’s Medical Center in West Palm Beach, Florida has been embroiled in controversy over its pediatric open heart surgery program since CNN did an investigative report about the astronomically high mortality rate for the infants in the program. As many as eight infants have died in the pediatric open heart program at St. Mary’s since the program began in December 2011. This incredibly high death rate is reportedly due to the fact that the St. Mary’s program was inexperienced at the difficult and risky operations on tiny hearts. The death rates for the open heart surgery program were kept secret from parents.

CNN reporter Elizabeth Cohen had to file a Freedom of Information Act request with Florida’s Agency for Health Care Administration in order to get any information about the death rates at St. Mary’s pediatric open heart surgery program. Ms. Cohen was able to find out that between 2011 and 2013, St. Mary’s Medical Center performed 48 open heart surgeries on infants and children. CNN confirmed the deaths of six infants after speaking with all of the parents of the deceased children. CNN calculated that the death rate for open heart surgeries was 12.5%, which is more than three times the national average of 3.3% as reported by the Society for Thoracic Surgeons. Dr. Michael Black, the lead surgeon in the program declined to speak to reporters for the story.

According to the CNN article, parents of the deceased infants now torture themselves because they did not know better than to send their sick babies to St. Mary’s for heart surgery. They could not possibly have known better because St. Mary’s pediatric open heart program does not publicly report its mortality rate.

St. Mary’s steadfastly denies CNN’s reporting about their death rates, but they also refused to publish what they consider to be an accurate death rate for the program.

[at St. Mary’s] seems to be too low for the institution and its staff to maintain and acquire proficiency in these types of challenging procedures. The situation is not the failure of any one individual. It is the failure of the entire system.”

Along with the story, CNN reporter Elizabeth Cohen and Ashley Strickland released a chart which details all of the pediatric heart hospitals in the U.S. and it lists each hospital’s level of transparency, the number of surgeons in the department and their mortality rate by procedure. They compiled data from the Society of Thoracic Surgeons.

Several of the parents of the infants who died at St. Mary’s have filed medical malpractice lawsuits against St. Mary’s hospital.

This type of information is critical to health consumers. We hope that the guilty parties will be held accountable, and that these grieving families may finally find some peace.