A Parmesan Cheese Only a Termite Could Love

A Parmesan Cheese Only a Termite Could Love 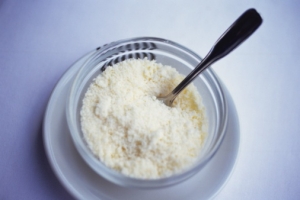 When you open up the container of Parmesan cheese to sprinkle on your lasagna, pizza or spaghetti and meatballs, you should be safe to assume that what you are eating is in fact Parmesan cheese. Turns out, that’s not always the case. In November of 2012, the FDA (U.S. Food and Drug Administration) paid a visit to the Castle Cheese factory in rural Pennsylvania because they had received a tip that they were doctoring their “real” parmesan cheese with substitutes and fillers, including wood pulp.

The FDA issued a stern warning against the company, which sold its product to large retailers such as Target. The company has since filed bankruptcy and its president, Michelle Myrter, is facing criminal charges related to the cheese scandal, but not because they were adding wood pulp to their cheese. The case was actually about violating the FDA’s food labeling laws, according to a story in the Washington Post.

The FDA actually permits the use of cellulose, which is a food additive that is derived from wood pulp. It is a flavorless, white product that is added to many foods. Cellulose is one of the ingredients that keeps shredded cheese from sticking to itself and forming clumps in the bag, it makes low-fat ice cream have a creamy mouth-feel, and it adds fiber and bulk to foods without increasing the calorie or fat content, because it does not get digested by the body. It also does not impart any nutrients. It simply takes up space and passes through the body unchanged. The FDA places a limit of how much cellulose can be added to food products, and the USDA limits the amount of added cellulose in meat products to 1 to 4 percent.

If it is legal to add some amount of cellulose – wood pulp – to foods that are packaged and sold in food markets across the country, then what is the big deal? Why is the president of Castle Cheese being indicted on criminal charges when cellulose is such a common food additive? Because, as an article in Eater.com says, it is basically consumer fraud. It is food fraud when a company adds sawdust to cheese and sells it as cheese.

Recently, consumers have been filing lawsuits against retail giant Wal-Mart and Kraft alleging fraud for selling cheese products that contain as much as 10 percent cellulose.

What can consumers do if they would rather not ingest wood pulp with their food?

Cellulose is a food additive, which can only be added to processed foods, so consumers who choose to purchase foods in their whole form can avoid cellulose and other food additives. Buy real cheese and grate it in your own kitchen. Avoid the low-fat versions of foods because they also contain cellulose. Being more vigilant about reading labels would not help in this case, because cellulose is often listed as “other natural ingredients” on food labels.